Cilantro, also known as coriander, belongs to the annual herb family Apiaceae. Its scientific name is Coriandrum sativum and is known for other local names such as Chinese parsley or dhania.

All parts of this herb are edible. Most of the time, the fresh leaves and the dried seeds are used as cooking spices.

This herb often has different usages in various countries. For example, in North America, cilantro refers to the leaves and stalks of the plant only while the dried seeds are called coriander.

But, for the rest of the world, coriander refers to the leaves and stalks of the plant. Moreover, the dried seeds are called coriander seeds.

Most of the time, cilantro is used as a flavoring in soups, salads, curries, and other dishes. However, aside from its cooking uses, this herb also has several benefits.

Cilantro is an analgesic, antioxidant, and a stimulant. As for its nutritional content, take a look at this nutritional data.

One cup of raw cilantro is about 16 grams (g) and provides:

It also contains vitamins C, provitamin A, and K, as well as trace amounts of the following:

This claim still needs more data, but it is believed that cilantro has anti-cancer properties. The test tube experiments showed results that indicate positive results but still need further studies into C. sativum and its impact on harmful activity in cancer cells.

Cilantro extracts help protect the skin against ultraviolet radiation. This is based on a 2015 study that tested an alcohol suspension of C. sativum on both human skin cells in a dish and skin cells in hairless laboratory mice. The results showed the potential of cilantro to prevent or reduce sun damage to the skin.

Aids in Pain and Inflammation

Another 2015 article about cilantro suggests that it may be useful as a remedy for pain and inflammation. This is because of the significant analgesic effect produced by its seeds.

A 2014 study about the essential oil derived from the leaves of cilantro and used on Candida albicans, revealed that the oil does indeed have antifungal properties. However, there is still a need for further studies to support the said claim. 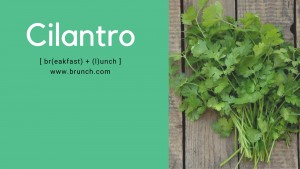 Here are the locals near you selling fresh Cilantro: