Star Apple is widely acknowledged because of its unique and intriguing characteristics, especially in tropical countries such as Hawaii, Africa, Philippines, and more. It has a sweet and savory taste, indeed perfect for the hot weather! Not only that, the fruit also contains medicinal properties which are useful for health and wellness purposes.

Scientifically called Chrysophyllum Cainito, the star apple is an exotic fruit that comes from the family of Sapotaceae. It originated from the Caribbean Islands. The fruit was named Star Apple because of its cores shape, which resembles a star and an apple combined. The fruit is popular for its role in making chewing gums, edible flowers, gutta-percha, oilseeds and timber.

The fruits skin texture is either smooth or leather-like, depending on its variety and age. The skin surrounds a creamy, milky and soft pulp. Star Apple contains anywhere between three to eleven seeds. Thus, those with less seeds seem to have the best taste. The meat of the fruit is aromatic and has a tropical sweet flavor that is slightly similar with an apple, persimmon and lychee. Full grown Star Apples are slightly wrinkled and dull in color with a soft touch when pressed.

Star Apple is not just delicious, it is incredibly nutritious too. It also serves as a natural alternative in addressing several health issues in the body such as: 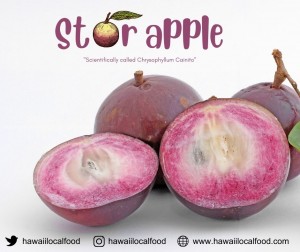 Here are the locals near you selling fresh Star Apple:

The Following Buyers will Purchase Your Fresh Star Apple: