The guava belongs to the myrtle family (Myrtaceae). Its scientific name Psidium guajava L. Guava is known by its common English name or its equivalent in other languages. In Hawaii, people call this fruit as guava or kuawa.

Guava is a small tree with a smooth, thin, greenish layer beneath the copper-color bark that flakes off. Its twigs are quadrangular and soft, while the leaves of different species vary from short-detailed, oval, or oblong-elliptic to being irregular in outline. Its white flowers have around 250 white stamens with pale-yellow anthers, and it has little to no fragrance.

The fruit also comes in different shapes. There are some that are round, ovoid, or pear-shaped. It can have a strong, sweet, musky odor when ripe, but it can be hard, gummy, and very astringent when consumed unripe. Round and pear-shaped guavas were considered separate species with scientific names P. pomiferum L. and P. pyriferum L., respectively. But they are now recognized are mere variations.

There are 21 guava cultivars from 7 countries that were introduced in Hawaii from 1948 to 1969. Such breeds were tested and evaluated at the Waimanalo Experimental Farm.

The following guavas are sweet, white-fleshed, and thick-walled, and are rated as commercially desirable:

On the other hand, these guavas have lower ratings:

There are also guava variants that are sweet, pink-fleshed, and thick-walled:

Every part of the guava tree offers medicinal values for different ailments.

The roots, bark, leaves, and unripe fruits have tannin, a naturally occurring compound responsible for the astringent taste when these are consumed. Tannins have antimicrobial properties, that is why guava is commonly used to stop gastroenteritis, dysentery, and diarrhea. There are also records showing the effectiveness of guava parts in halting vomiting and diarrhea in cholera patients.

The leaves can do so much more. Crushed leaves are applied on wounds, ulcers, and rheumatic places. It can also be chewed to relieve toothache. A decoction from the leaves is also consumed to palliate cough, throat, and chest ailments. It can be gargled as well to soothe oral ulcers and inflamed gums. Other notable medicinal values of the leaves are its capabilities to stimulate menstrual flow and kill parasites inside the body without harming the host. A leaf infusion is prescribed to patients with cerebral ailments, nephritis, and cachexia, while an extract is given to patients with epilepsy and chorea. A combined decoction of leaves and bark is also given to mothers to expel the placenta after childbirth.

There is so much more guava can offer. Guava is versatile. Its tree parts are useful on many cases such as leaves can be made into an herbal tea and the extract can be turned into a supplement.

This time, the spotlight is on the guava fruits which are surprisingly enriched with various health benefits. The table shows the food value for every 100 grams of whole ripe guavas when consumed:

Guavas are also known to have higher levels of potassium and soluble fiber. These nutrients are important in boosting heart health. Studies from the National Institutes of Health have shown that guava leaf extract has been linked to lower blood pressure, where it manifested a decrease in bad LDL cholesterol and a rise in good HDL cholesterol.

Apart from soluble fiber, guavas are also a good source of dietary fiber that is very essential for the digestive system. One guava can supply 12% of the recommended daily intake of fiber. Guava leaf extract is proven by a lot of studies to be antimicrobial, which means it can neutralize the harmful microbes in the gut that causes diarrhea.

Guavas should be a part of the diet for those who are wanting to lose excess body weight because guavas have only 37 calories per fruit. It is also packed with lots of vitamins and minerals, so the important nutrients the body needs are not compromised while on strict diet measures.

Guavas have about twice the amount of vitamin C that one can only get from eating one orange. Vitamin C is crucial for maintaining a healthy immune system, and guavas are one of the richest food sources of vitamin C.

It is safe to take guava in food amounts. However, it is advisable to consult your doctor before taking guava supplements during breastfeeding and pregnancy. 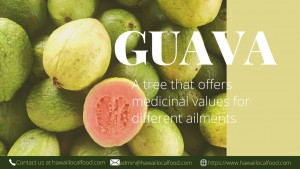 Here are the locals near you selling fresh Guava:

The Following Buyers will Purchase Your Fresh Guava: